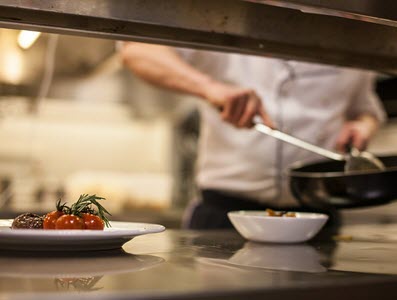 Restaurants have long been unofficial cultural ambassadors and have served as an outlet for new immigrants to make a good living and employ family and friends, according to Kim Palmer, a writer with Reuters America. “In the past 20 years, we have seen the rise of a variety of ethnic restaurants, from Thai to Cuban to Middle Eastern, and the entire food industry has benefited from this trend [because consumers are] preparing fewer meals at home.”

As an example, she writes about an immigrant from Lebanon who came here to go to school, working at a Little Caesars Pizza to cover his living expenses. This was his introduction into the U.S. food service industry. When he graduated, instead of going home as planned, he purchased several Little Caesars Pizza franchises.

While his Little Caesars outlets proved successful, what he wanted to do was open a chain of Lebanese restaurants, cooking and serving the type of food he grew up eating. And so, he did it.

He sold the pizza franchises and opened up his first Lebanese restaurant in Cleveland Heights, Ohio, in the early 1990s. As a result of his training and experience at Little Caesars – and a lot of good old-fashioned hard work – this first restaurant (and along with it, Lebanese cuisine) became very popular. It wasn’t long before he had 17 restaurants in five different states, employing more than 1,000 people.

But here is where some problems set in: how could he keep his 1,000 employees all on the same page? He needed them preparing Lebanese food correctly and doing so consistently.

Further, he needed to stay one step ahead of the ever-changing American diet—something he first learned about while working at Little Caesars. There were times, for instance, when customers were more interested in lighter menu options and other times when they were not. His menu had to reflect these changing dietary patterns.

He addressed this situation by opening up a training center. Key members of his staff would come to the center, stay a few days, and learn how to prepare Lebanese food properly. This proved valuable, but was costly. Menu changes and other updates were still handled by phone calls, fax machines, and in-person meetings with restaurant chefs in the 17 locations.

This is the way things used to be done. This method could be haphazard, invariably took time, and all too often, restaurant staff would forget what they had just been taught, especially when it came to menu changes.

Today, we have a much easier way. New, cloud-based kitchen automation systems are available that help restaurant owners and managers make sure everyone is on the same page, instantly, whether in one location or 1,000. These technologies can instruct all staff members of menu changes, streamline training and communication, pass on regulatory information when needed, and allow for food label printing, with all nutritional information updated in real time.

This type of technology helps ensure consistency and consistency is the name of the game in the food service industry, according to Palmer. “If you give your customers consistency, they will give you the same.”

For more information on DayMark’s kitchen automation systems with MenuCommand™, contact a DayMark representative at 800-847-0101.