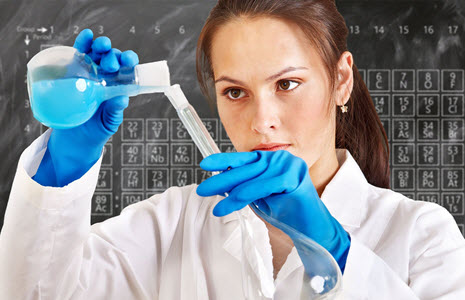 Often the first thing – and many times the only thing – consumers look at when reading a food label is how many calories the item has. This is a disservice to the many other items listed on the label. It can be just as important, and many times more important, to also know the amount of sodium, fat, fiber, minerals and vitamins the food item has.

However, because consumers do put so much focus on calories, we should know a bit about how this amount has been calculated in the past and more about how it is estimated today. So, put on your chemist hat and follow me.

First, something we need to know is that one calorie on a food label is known in chemistry as a kilocalorie (kcal) and equals 1,000 Calories (spelled with a capital C). So if the label on a candy bar says it has 200 calories per serving, that’s 200,000 Calories to a chemist.

One of the first ways used to determine how many calories (kcals) are in a food item is to determine the amount of energy it produces to raise the temperature of one kilogram of water .

A test food item would be placed in a specially designed, sealed container surrounded by water. This is referred to as a “bomb calorimeter.” Under controlled conditions, the food is then burned, and the resulting rise in water temperature is measured. The increase in temperature would then tell us how many calories are in the food item.

This process is not used as much today.

In the 1990s, another process, called the Atwater System was developed. With this system, there is no burning of food. Instead, calorie counts are essentially “guesstimated” by adding up the number of calories provided by the energy-producing nutrients in a food item. This would include such nutrients as protein, carbohydrates, fat, alcohol, etc. This system is based on the following values:

So, using the Atwater System, if a candy bar’s label says it has 10 grams of protein, 20 grams of carbohydrates, and nine grams of fat, the calorie count of this candy bar would be about 200 calories.

This is certainly a complicated procedure. And if a food supplier, retailer or service operation, such as a school cafeteria, wants to determine the number of calories in one of its recipes, it could take a team of kitchen helpers using a team of computers to come up with the count.

Fortunately, there is a much easier way. Menu management systems are available that can analyze a recipe’s nutritional content such calories, vitamins and allergens, literally in seconds. The system can also make these calculations based on portion size, and for food retailers specifically, help determine costs, profit margins, and even the amount of sales tax to add on to the sales price.

This means, at least when it comes to food recipes, we don’t need calorie calculating “bombs” or a team of kitchen helpers with computers. We just need a menu management system that does all the legwork.